“Life is hard for the poor, don’t film them while giving them bread” – TG Omori

Nigerian music video director and cinematographer, TG Omori, has said people should do away with cameras when helping the needy.

Omori, who stated this in a tweet on Tuesday, May 17, while addressing several societal issues, said acts of giving or helping the poor shouldn’t be publicized.

“Life is hard for the poor don’t film them while giving them bread. Every man has pride na hunger humble them, deep down he doesn’t wish to be on social as the poor one who couldn’t afford bread but I mean a beggar has no choice.” He tweeted. 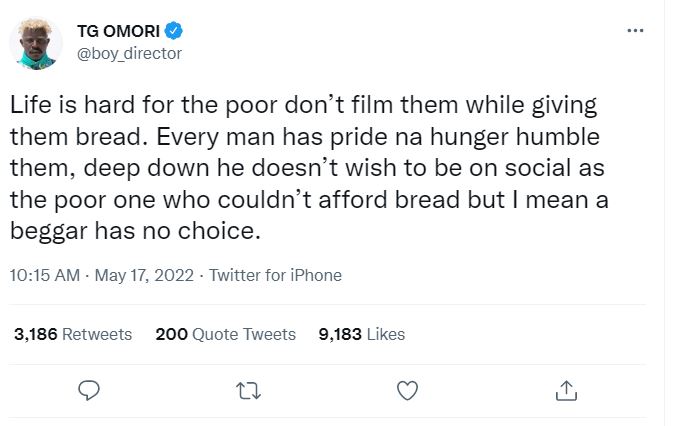 In related news, Nollywood actress and filmmaker, Shan George, has berated people who publicize their acts of giving.

Taking to her Instagram stories on Wednesday, December 29th, the thespian noted that she has no respect for people who announce it when they help the needy.

According to her, charity and altruistic acts should be done secretly without anyone knowing.

“Abeg feel free to reason am as you like oo, as for me I have no single respect for anyone who doesn’t keep their cameras at home while helping the needy”, she wrote.